skip to main | skip to sidebar

Dates for the TME 2011 trip to the Roatan Institute of Marine Science (RIMS) will be July 30 to August 6. Check out the TME 2011 BLOG for more details.
Posted by Garry Dole at 12:18 PM No comments: 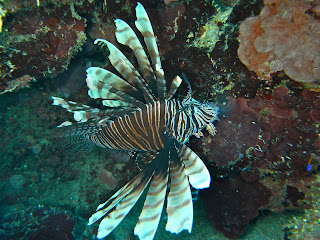 COSEE Great Lakes takes great pride in offering educators research opportunities on and under the waters of the Great Lakes and the oceans. Teachers who took part in the Tropical Marine Ecology [TME] workshop in Roatan, Honduras, in August experienced the impact of invasive lionfish research first hand.
Read this article by Helen Domske....
Posted by Garry Dole at 8:13 AM No comments:

Fantastic Friday in the Sun

Friday began with discussion about the Thursday night dive, which included seeing a tiny reddish-orange crab on a sea fan, and a slipper lobster.  We listened to Jen at a morning sea turtle lecture with current information about conservation techniques being utilized in Central America.  We found out that all sea turtles are either endangered or threatened, and were encouraged to educate our students about choices they could make that could have a positive impact on ocean life.
The morning divers went to see the shipwreck Aguila, where a spiny oyster was observed.  Snorkelers saw fishes and creatures at the nearby reef crest.  After lunch, a trip into town was helpful for souvenir shopping, and an island tour included a stop at the iguana farm.  If you are ever in West End, be sure to stop at Earth Mamas for a fruit smoothie! 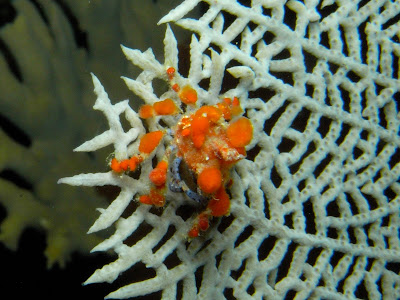 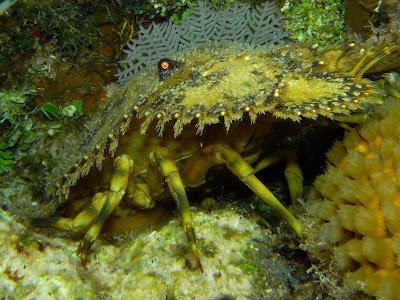 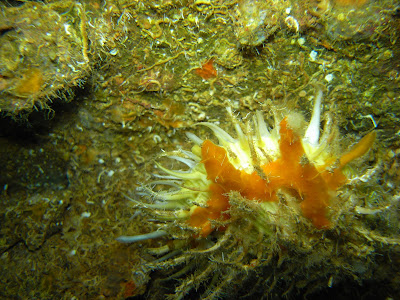 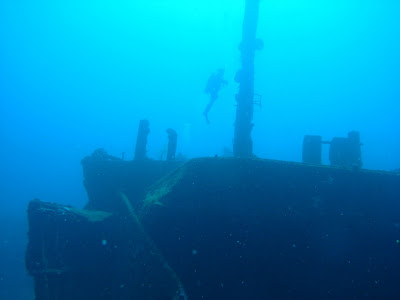 Thallasia Thursday in the Sun 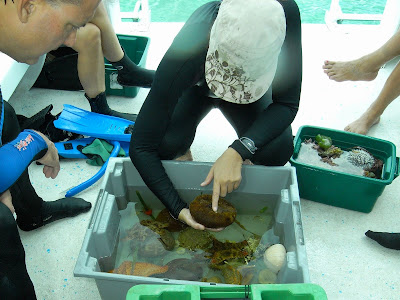 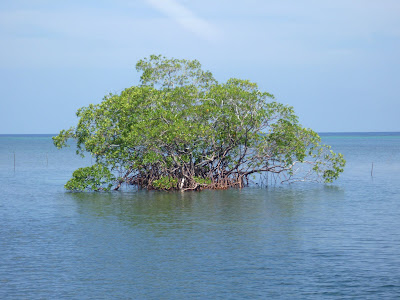 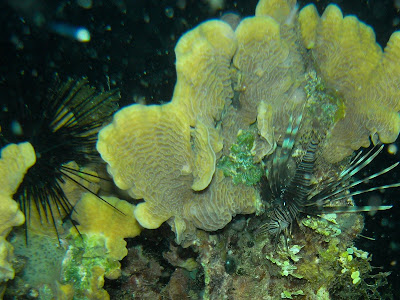 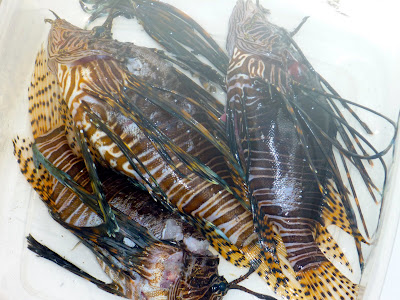 The day started with a lesson on mangroves, which make up an important ecosystem in the tropics. These specialized trees, the red, black, white and gray mangroves, help to protect the islands, stabilize sediment and serve as nurseries for the coral reef. Our snorkel along the red mangroves delivered a snapshot at this amazing, but often unprotected area. Seen by some as nuisance plants that are bulldozed to make sandy beaches, the mangrove community that we experienced showed us oysters, colorful worms, small fishes and even a problematic invasive…the lionfish! These fish have made their way from its native Pacific to home aquaria where they have been released to the wild. Roatan saw its first lionfish last year and already we have seen this venomous invader on several of our dives/snorkels. Fortunately, our dedicated dive-master, Alson, was prepared to capture and eliminate the 3 lionfish that the group spotted on our snorkel. Shouts of “lionfish” sent Alson over to rid the area of this dangerous fish. More than just a threat to unknowing snorkelers or divers, this Pacific invader has a huge mouth and a voracious appetite for small reef fish. Some biologists believe they can eats dozens of small fishes each day, which has the potential to impact fish communities on the reef. After lunch, Helen gave a lecture that compared/contrasted the fishes of the Great Lakes with marine fish. COSEE Great Lakes teaches about ocean literacy through this course, but since the teachers call the Great Lakes home, it is important for them to realize there can be a connection between fish species. Body-shapes, fin structure, coloration and reproductive strategies can be compared/contrasted between the two distinctive environments. The evening ended with a night dive for part of the group. These dives offer a unique experience to be on the reef during an important transition time from daylight to night, when the reef comes alive with creatures not seen during the day.
Posted by Garry Dole at 11:17 PM 1 comment:

Hi Everyone, We do want your comments and sorry that the feature was not accepting everyone. It should work now!
Posted by Garry Dole at 9:02 AM 1 comment:

Wonderful Wednesday in the Sun 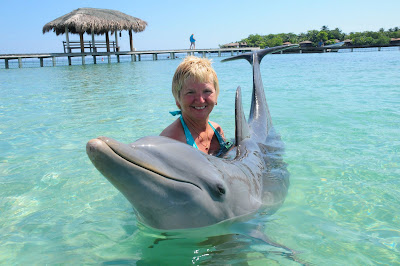 Helen with Marguerita
We woke up after dreams of a night snorkel that the group took the night before. Seeing reef creatures at night adds a special dimension to reef ecology. As Kathy Dole said, “Put your PJ’s on!” describes how some fish change their daytime or diurnal coloration to the coloration they show for the nocturnal period. A juvenile butterflyfish can show a brown splotch where a white body side had been. Others, like parrotfish, completely darken their coloration; or, a surgeonfish adds bars to its “PJ’s” at night. Night snorkels also bring sightings of crabs, lobsters, and the favorite...an octopus!
Wednesday morning started with an algae lecture and then came the highlight of the week: an encounter with Atlantic bottlenose dolphins that call AKR home. Our dolphin, Marguerita, proved to be a young, enthusiastic female, who put on a real show for us. We all got to hug her and get a dolphin smooch from this sweet little cetacean. After our encounter with her, we got to spend 30 minutes snorkeling with the entire pod of 28 dolphins, but Marguerita, seemed to stand out. She eagerly squeaked and squealed as we played with her, using seagrass and shells. Garry occupied her attention for over 10 minutes by playing “catch” with her using a pencil sea urchin. She would gently grasp the urchin, carry it away, and then drop it for him to “fetch” it back for her. Hmmm..who’s training whom? We all left the seaside enclosure with big smiles and warm memories of the little dolphin who showed off her gentle ways.
The day also included 2 snorkel/dives where we picked samples of algae to observe up-close, providing some experiential learning. The dives/snorkels also let the group get some more practice identifying the reef fishes and invertebrates we have been learning about.
The evening brought the island barbeque that offers a taste of island food, hermit crab races, limbo dancing contest and breath-taking fire dances from a troupe of native entertainers. It was a nice ending to a memorable day at AKR. 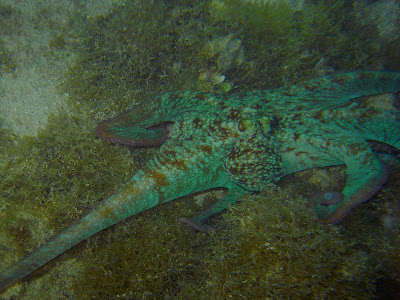 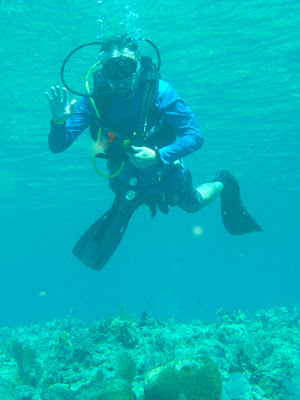 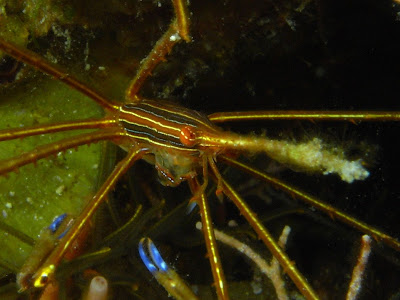 Arrow Crab
Posted by Garry Dole at 8:56 AM No comments:

Terrific Tuesday in the Sun

The day started out with a trip to Blue Harbor hydroponic farm, where we met with Dr. Val Eylands, an agronomist who left his faculty position in the US to start a new venture in Roatan. Val provided an inspiring tour of his operation, comparing the hydroponic operation to traditional farming. As he pointed out, he can produce a similar crop of lettuce using 10% of the land, water and pesticides of traditional farms. Although hydroponics can be labor intensive, he has empowered local women by providing them jobs and a chance to improve their standards of living. The teachers were thrilled to find out that the lettuce they have been enjoying in their daily salads comes from Val’s farm….fresh to the kitchen at AKR.
After the farm trip, the group headed to the intertidal area where they got to see snails, anemones, algae and small fishes that make their home in the tidepools and under the coral rubble. The teachers walked along a wall at a newly built resort and were able to see that the construction material was huge chunks of dead corals that had washed up on shore. They were actually able to pick out brain, star and staghorn coral formations from the wall. In many of the islands of the Caribbean, coral rubble is used for road and building construction. The calcium carbonate skeletons provide a concrete-like building material that provides strength and support.
The afternoon dive/snorkel really made it a “terrific Tuesday” as the divers encountered an 8’ nurse shark resting between two coral outcroppings. As the nurse shark rested on the bottom, it was easy to see its gill flaps as the cartilaginous fish pumped water over its gills. Although many sharks need to keep swimming in order to force water over their gills, bottom-dwelling nurse sharks can breathe as they remain in one place. The nurse shark gets its name from the suckling or nursing sound that they make as they suck up bottom dwelling prey like crabs and mollusks. The nurse shark is pictured with a remora, or shark-sucker that scrapes off parasites from the shark’s body and gills. This symbiotic relationship provides a cleaning service for the shark and a free meal for the remora. The dive and snorkel also provided views of a Nassau grouper with its brown body bands and an odd-looking trunkfish with it triangular shaped box-like body. The delicate lettuce sea slug proved to be the most beautiful sighting of the dive, with its frilly gills and colorful markings. These nudibranchs are often overlooked by divers who may not keep a watchful eye out for the colorful invertebrates.
Posted by Garry Dole at 11:17 PM 1 comment:

In Tropical Marine Ecology we will study the biodiversity of a coral reef ecosystem and the related habitats that support its complex structure. Observe the dynamics of age-old survival relationships of unique animals on the reef and the pressures of an emerging tourist destination on these delicate relationships. Swim and interact with dolphins at the largest dolphin encounter in the Caribbean. Comfortable boats will deliver us to the calm, sheltered coral reef lying just offshore, where you will be snorkeling among the reef fishes in warm water almost as clear as air. This course is a must for nature lovers and science teachers at all levels. Transform life science and social studies lessons with materials and experiences that will allow students to construct their own models of these complex but crucial ecosystems.

Check out these links....

CURRENT MOON
about the moon

Garry Dole
This will be our twenty-second trip traveling with teachers to the Caribbean for an in-depth study of coral reef ecology. In my day job I coordinate an Elementary Science Program which provides science kits to elementary classrooms.